PARKER, who gave up smoking his trademark big Cuban cigars in 1990, had a meteoric rise from being a hobo in the late 1920s to a top show business manager.

Tom Parker was born on June 26, 1909 in Breda, The Netherlands to Adam and Maria VanKuijk who named their fifth child Andreas Cornelius VanKuijk. As a young man Parker immigrated to the United States where he worked on carnivals and served four years in the United States Army.

After his discharge from the army he went back to carnival life. In late 1939 and early 1940 he became the manager of Gene Austin and traveled with Gene's "Models & Melodies" show.

In late 1940 he became Field Director of the Tampa Humane Society, a position he held for three years. Tom Parker left the Humane Society to go back into the entertainment field, booking country acts. In 1944 he became the manager of Eddy Arnold and by November 1947 Eddy had been #1 on the country charts for 53 weeks.

When Tom Parker and Eddy Arnold went their separate ways, Tom began booking Hank Snow and in January 1955 became his personal manager. Colonel (as he was now called, having been given an honorary title of "colonel" by several southern governors) began booking Elvis Presley as an opening act on the Hank Snow appearances.

June 6, 1993 at a 70th birthday party given for Virginia Kelley
(mother of President Bill Clinton).

In October 1955 as Elvis' special advisor (Bob Neal was still managing Elvis), Colonel negotiated a recording contract with RCA Victor for Elvis. It should be noted that it was, at that time, the custom for the A&R people to choose the songs for an artist to record. However Colonel insisted that Elvis choose his own songs. Today it is common practice for the artist to choose their own material. . . .but Elvis was the first.

In 1956 Colonel became Elvis' personal manager. By the end of their first year together the WALL STREET JOURNAL reported that since Colonel began marketing Elvis merchandise, they had grossed some $22 million in sales. Elvis records and albums were selling in the millions. Together they made history.

After reading a newspaper story pleading for support for the Arizona Memorial fund, Colonel talked with Elvis and they decided to offer a benefit concert to raise funds to finish the memorial which honored those who lost their lives during the devastating surprise attack on the military installations at Pearl Harbor. In March 1961 the concert took place and nearly $100,000 was raised. Nothing from the receipts was held out for expenses--in fact Elvis and Colonel EACH paid $27,000 out of their own pocket to cover expenses.

In August 1972 Colonel originated the idea of Elvis performing worldwide via satellite--the first time an entertainer had performed via satellite. The show took place in Hawaii January 14, 1973. It was seen in about 40 countries by one billion to 1.5 billion people. The show also raised $75,000 for the Kui Lee Cancer Fund in Hawaii.

After Elvis' death in 1977 Colonel was a personal entertainment consultant for Barron Hilton, a position he held until his death in 1997. Although Colonel was asked to manage many entertainers, he declined, saying it would always be ELVIS & The Colonel.

NOTE: To set the record straight ... the name "Dries" was a nickname his family used when he was a child. There was never a "Great Parker Pony Circus". Also there were never any "dancing chickens". This was a joke Colonel used to test the gullibility of people. It has been repeated (and believed) so many times that there is no doubt people are gullible!

"To give you a little background about myself - I met Colonel in 1969. As you know, RCA Records Tours sponsored the Elvis Presley Tours beginning in 1971. I was the RCA Record Tours secretary on the Elvis tours and worked under the direction of, and traveled with, Colonel Tom Parker during the touring years. I experienced the Elvis Presley tours - and what an experience it was! Colonel and I shared more than 25 years together and those were wonderful years."
-Loanne 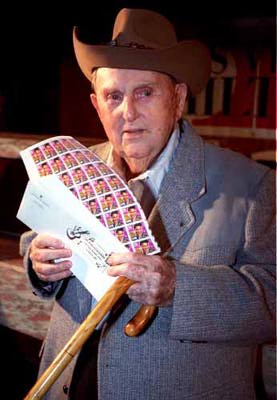 Courtesy Art Nadler and Ed Koch, Las Vegas Sun
The Colonel's Passing:
LAS VEGAS, NV - At age 87, Col. Tom Parker was still working as a consultant for an upcoming Elvis Presley movie and advising the Hilton hotel chain on entertainment when he suddenly suffered a stroke. The cigar-chomping manager who catapulted Presley to megastardom remained active until his death. His wife, Loanne, was at his bedside when he died.

"He could tell you who's hot and who's not," longtime friend and former Las Vegas Hilton Publicity Director Bruce Banke said. "The colonel could tell you who's grossing what in each city around the country." Banke said he was besieged with phone calls from reporters in seven countries after Parker's death. Parker was cremated and interred at Palm Cemetery on Eastern Avenue in Las Vegas.

"I handled the press when Elvis died," Banke said of Presley's former manager. "I never expected this response (to Parker's death). For a manager to be held in such high esteem is a surprise. He's as well known as Elvis."

Elvis and Parker came to Las Vegas in 1968, Banke said. The entertainer appeared at billionaire hotelier Kirk Kerkorian's International Hotel in 1969, which was later sold to Hilton.

"There, in the Hilton Showroom, Elvis entertained 2.5 million people during 837 unfortgettable live performances. Through all that time ... there was the colonel, the strength behind the 'King.'" Parker at one time maintained several suites at the Las Vegas Hilton. He moved to a private Las Vegas residence in 1985.

"The colonel was an avid reader," Banke said, "He loved biographies. He recently gave me a book on Ann-Margret. He also loved to go out for lunch every day." Like Elvis, Banke said Parker gave generously to his friends. Every Mother's Day, the colonel would display a huge bouquet of flowers, signed from "Elvis and the Colonel," at the Las Vegas Hilton entrance.

"When my father died, one of the biggest bouquets on the wall (at the funeral home) read, 'From Elvis and the Colonel,'" Banke said. "He was a generous and caring human being. And you'd be surprised how many people would recognize him." When not doling out entertainment advice, Parker could be seen at local casinos playing slot machines. "He loved to play slot machines," Banke said. "He would say, 'I'm going down to get my exercise.'"